Stu relies on clean design, simple typography relationships, and vector-based graphics to help convey information and meaning to others in a clear and easy to digest format.

See some examples in action on his YouTube channel or browse his portfolio!

Central to this illustration involves: 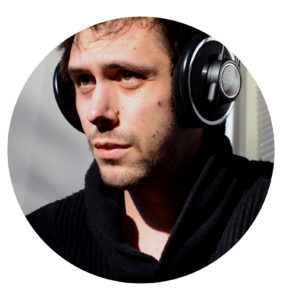 His somewhat simplistic on the surface, “less is more” philosophy was directly inspired from a quote that he stumbled across at the Museum of Design Atlanta (MODA) back in 2013:

It’s a powerful idea that has stuck with him to this very day.

Up until that point, Stu struggled quite a bit in finding his style and design “voice.” He agonized over trying to be “unique”, or “the best” but didn’t really know why. There was no clear reason for what motivated him, and his designs suffered from a lack of direction and purpose.

His work at the time was “okay”, but when he submitted his portfolio to then teacher and designer Jon Jicha, some sort of disconnect became apparent.

“I think you need to take your future as a designer in the field more seriously. I see potential in you, but right now your portfolio is lacking. Frankly, it’s weak and needs a lot of work.”

Jon Jicha offered him some tough love, which didn’t feel good, but was instrumental in helping him evolve into the more confident designer he is today.

It wasn’t an easy process. It was painful and created a lot of self-doubt about Stu and his abilities as an artist. And he’s continuing to power through even now – still fine-tuning his skills, learning what works and what doesn’t, working to become a better illustrator, and discovering new ways to convey information (what Jon likes to call “Framing Meaning”)

One assignment in particular from Jon had become a sort of a meme at the time. Everyone in the class dreaded it, and Stu, in his frustration, almost gave up on it completely.

The process involved coming up with ways to relate a single word with many different images. This could be the same word used in a different context (i.e mail vs. male), a single word, etc. To Stu’s immature mind, it seemed like a pointless endeavor:

“You want me to list out words, come up with images to describe the words, and then make a book out of it?”

It was the single most challenging project he’s ever had to do (he actually did it twice because the first one was so awful), but it changed his life. It forced him outside of his comfort zone and required him to really think in terms of language and communication; what it actually means to be a designer rather than arbitrarily design things (and there is a clear distinction).

Looking back on it, I can truly say without a shadow of a doubt that what Jon was trying to convey to us is the single most important concept in graphic design – the ability to use an image in order to convey an idea.

It’s one of those things (like most things in life), that can only be appreciated in retrospect. It’s central to everything true about design but is often overlooked because, well, art. People like to look at pretty things, but there’s always (or should always be) meaning behind it. This is in essence what design is about: in a logo, in a poster, in a flyer, an animation, etc.

The above video is an example of a graphic that I made for the sound portion of my Headphone Reviews. It’s something that I created in 2018 but still use to this day. Check out some more of the process here!

What I aim to do is utilize these techniques to create a design that ultimately works for YOU. I would love to work with you!

I offer the following services for businesses and individuals:

I generally charge half of the total cost upfront. This protects me from getting taken advantage of; by parties who aren’t that serious about paying for great design.