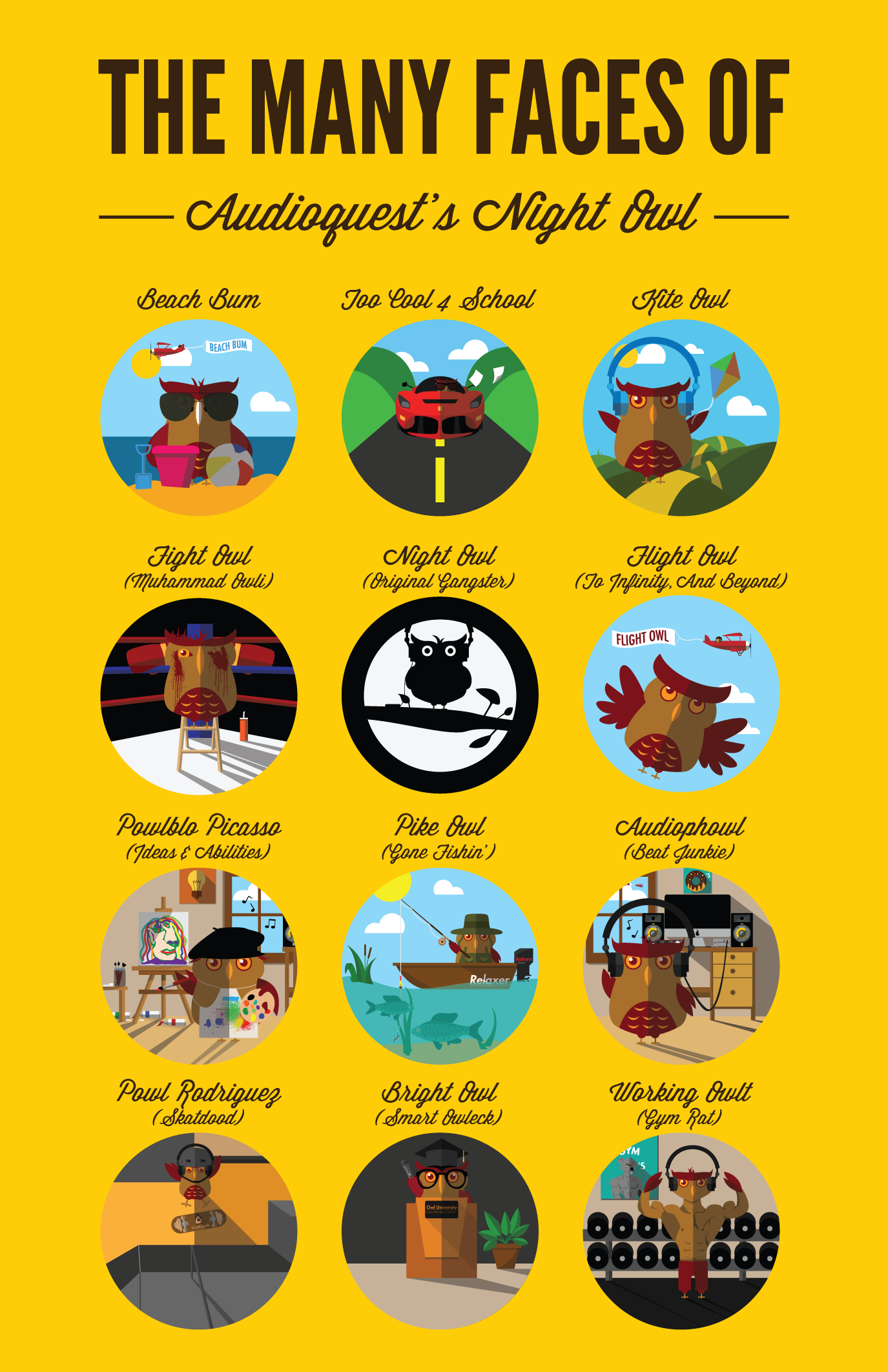 Interested in purchasing a print? Head on over to the Shop!

The Many Faces of Audioquest's Night Owl

Fonts Used: League Gothic, Wisdom Script, Futura Medium Condensed, Heavy, Heavy Oblique, Bold Oblique, Medium, Book.
Text or Implied Text: Beach Bum, Flight Owl, Relaxer, Saturn Motors, Trill (text on the bobber), Donuts, Birdhouse Skateboards, Owl University - Home of the Smart OWLecks, Gym Rats.
The idea came for this graphic innocently enough. I was going to design a simple Owl for my Audioquest Night Owl Headphone Review.
So I got to work, and at first I was going to make a bunch of different colored Owl's with alternate hair and feathers. As I was making the first one, I thought it might be neat if I had him wearing Aviators. So I started making the sunglasses, but then I thought it would be interesting if he was at the beach, with suntan lotion caked on his little nose :P
At this point there was no turning back, but I didn't realize just how in depth and carried away I was about to get. The idea to have him in different environments was pretty intriguing, but I didn't really know how to go about it.
I thought about the original "Night Owl" and began rhyming the word as a way of brainstorming. From there the ideas starting flooding in, and I even used the word Owl as sort of a play on words with other phrases and ideas.
For instance, Muhammad "Owli" instead of Ali, Powlblo Picasso in place of Pablo, Audiophowl for Audiophile, and so on. I think this graphic works because it juxtaposes a bird with various environments in which it would never dwell. The idea of an Owl engaging in any of these activities is rather humorous considering it's not equipped to do any of the tasks portrayed (besides fly, but not in an actual plane). Lol.
It evokes a sense of childlike wonder and imagination, where anything was possible, and fairytales were treated as reality. The graphics are also interesting enough on their own, and work solo as well as grouped together.
It also does a good job of blending genres and mediums together, while cross referencing the arts as well as different forms of entertainment. For instance, the poster on the wall of the "Audiophowl" graphic is an album by the late J Dilla entitled "Donuts". If you're into Hip-Hop or music in general, you might be familiar with it.
The phrase "Idea and Abilities" for the Picasso graphic came from the Minnesota based Hip-Hop group "Eyedea and Abilities" consisting of duo Eyedea (Michael David Larsen), and Abilities (Gregory Keltgen). Of course "To infinity and beyond" for the Flight graphic is Buzz Lightyears' often repeated catch phrase in the popular movie Toy Story.
The skatepark piece recalls the skateboarding company Birdhouse, founded in 1992 by Tony Hawk and Per Welinder, and also references famous skateboarder Paul Rodriguez. These are subtle additions, but they add to the playful dynamic of the graphic by keeping it lighthearted and fun.
If all that wasn't bizarre enough, the graphic ends with a pumped up steroid using bodybuilder Owl bro, complete with a "Gym Rat" poster in the background for an added dose of strange irony, or something. I don't know. Haha. I do know that he skipped leg day many a time. :D
I had way too much fun with this one, and I know you'll enjoy it in some capacity. There's a bit here for everyone! Can you spot the mistake/inconsistency in the graphic?